The Power Ledger Platform is an Australian-based environmentally conscientious company that aims to create a decentralized peer-to-peer energy sharing platform based on the Ethereum blockchain that allows users to sell and purchase excess energy directly to and from one another. This can apply to either individuals or larger institutions. By doing so, they hope to not only empower consumers to lower their energy costs, but to also enable them to access more sustainable and autonomous sources of energy from Application Hosts (service providers).

The platform will provide a transparent and secure ecosystem through which individuals can transact Power Ledger’s POWR tokens for an Application Host’s excess power, as well as negotiate contract terms. The smart contracts will also provide an autonomous method of contract arbitration, escrowing and fulfillment between parties.

Consumers are looking for cheaper, more reliable and self-sustaining means of acquiring energy, especially in places such as America where major powerplants have been destroyed due to hurricanes and other phenomena. The interest in adopting Distributed Energy Resources (DER) is especially evident in countries such as Australia where there are more private individuals adopting solar photovoltaic systems (PV) than transmission networks since 2011.

They also predict a higher adoption rate of electric vehicles in the future, which will also increase demand for alternative electrical charging sources. Furthermore, cheaper, self-generating power sources are especially relevant for developing countries, where millions of people still do not have access to electricity.

The Power Ledger Platform is intended for global adoption, and is therefore designed with the scalability to handle mass use, customized contract terms and use cases. The platform operates on two blockchain layers, namely a public layer and consortium layer, as well as a number of other intermediary layers. 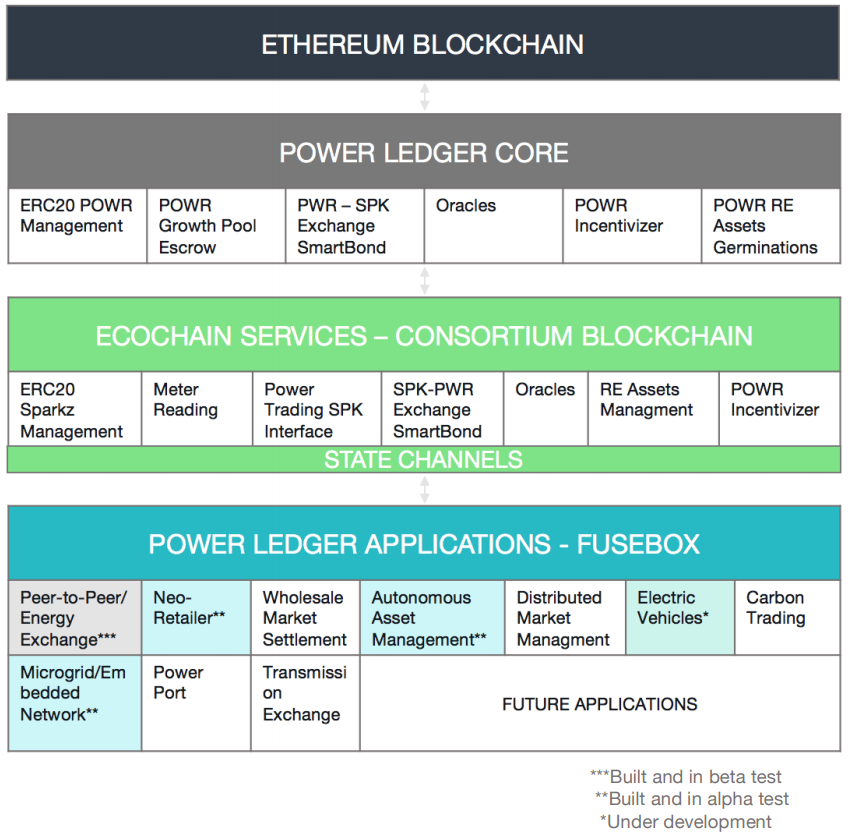 Power Ledger has opted to use two operating tokens as a means of ensuring market flexibility within its ecosystem. Both tokens are available and actionable on all layers of the Power Ledger Platform. POWR tokens can be purchased with ERC20 Sparkz tokens and are used to initiate and complete smart contracts on the platform. In turn, Sparkz smart contracts can only be for fiat currencies and can be traded between users who are either located in the same country or are using the same currency. This is due to Sparkz prices being set according to each country’s local exchange rate, whereas POWR token value will be based on their value on crypto-exchanges. Once Sparkz have been escrowed against POWR tokens, they are withheld by the platform until the terms of the smart contract are complete, at which time they will be released to the service provider as remuneration for their services.

There are a few more noteworthy distinctions between these tokens: