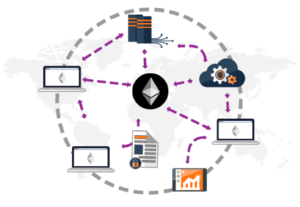 If we say that the Bitcoin Blockchain was the first generation of blockchain technology then we should say that the Ethereum Blockchain was the next generation Blockchain.  Like the original blockchain built around Bitcoin, the Ethereum Blockchain is an open source project built by a community of people.  As such is it decentralized and allows for the distribution and maintenance of large amounts of data on the network.  It also allows for direct peer-to-peer transactions either cryptocurrencies or data.  The basics of the two blockchains are similar but Ethereum takes it to the next level.

Ethereum Blockchain – The Next Generation Blockchain

Although nobody dismisses the amazing accomplishment of the original blockchain, it has its limitations.  As we have mentioned, Bitcoin blockchain is basically a table of account balances, a ledger and a list of transactions that allow the transfer of Bitcoin directly between two parties without the need for a middleman. As time progressed, many novel projects emerged using the blockchain technology for other purposes, not only the transfer of cryptocurrencies. The birth of “Alt Coins” had come and developers used separate blockchains of their own and created other cryptocurrencies, taking the fundamentals of the bitcoin blockchain and adding additional capabilities and features.

Ethereum also created it’s own digital currency, Ether.  Ether is similar to Bitcoin in that it is mined and created by the solution of a complicated mathematical equation to release the coins.  The Ether themselves are used to power the Ethereum Network.

We will not get into all the technical information related to the Ethereum platform and how it works specifically but will provide links in the Resource section below where you can find more detail.  We will however focus on the most interesting feature of the the Ethereum Blockchain as the platform for other blockchain projects and technologies.

As mentioned above, Ethereum allows for the creation of decentralized applications, known as “dapps” for short on its blockchain.  A dapp works with self executing “smart contracts”. A computer scientist, Nick Azabo in 1994 coined the phrase “smart contracts” .  His descriptions was:

“A smart contract is a computerized transaction protocol that executes the terms of a contract. The general objectives are to satisfy common contractual conditions (such as payment terms, liens, confidentiality, and even enforcement), minimize exceptions both malicious and accidental, and minimize the need for trusted intermediaries. Related economic goals include lowering fraud loss, arbitrations and enforcement costs, and other transaction costs.”

It can be said that bitcoin was the first dapp, however dapps have evolved much further. Since the completion of the Ethereum Blockchain it has become the foremost location for development of these dapps as it was built specifically for this purpose, to not only facilitate cryptocurrency, but to allow for a full range of applications to run on its technology and network.

Here are just a few of the dapps running on the ethereum network and what they do.

This is in not even a small selection of dapps developed on the Ethereum Blockchain.  All types of applications have been developed and more are coming.  The vast majority of these dapps are being developed on Ethereum.