The EtherSphere ICO will launch on August 5, 2017.  EtherSphere believes that the blockchain is the perfect format for Game-Theory as they open the whitepaper with these words:

“Game theory based games are made possible on the Ethereum network because of anonymity that is provided on the blockchain and trustless smart contracts that ensure all rules are faithfully executed regardless of individual participant’s actions.”

Before we move forward regarding the Ethesphere ICO, let us get a definition of Game-Theory from Wikipedia:

“Game theory is “the study of mathematical models of conflict and cooperation between intelligent rational decision-makers.” Game theory is mainly used in economics, political science, and psychology, as well as logic, computer science and biology. Originally, it addressed zero-sum games, in which one person’s gains result in losses for the other participants. Today, game theory applies to a wide range of behavioural relations, and is now an umbrella term for the science of logical decision making in humans, animals, and computers.”

Game-Theory goes further as it analyses the actions of one participant in a “zero-sum game” relative to the others.  In a zero sum gain, the gains or losses of an individual are balanced equally to the other participants.  Therefore, it is “zero-sum” as the total rewards equal the total losses.

In the game Prisinor’s Dilemma, each round has a time limit of 12 hours consisting of a reward pool and a jackpot. Players participate by registering their wallet and have access to a collaboration box for social interaction with other players. To play, players will place bids in ether with the intent to earn positive gains from the reward pool or win a large jackpot. Bids placed by players form a bid pool by the end of each round.

You can see the allocation of the bids from each bid pool and the flow of rewards from the diagram below: 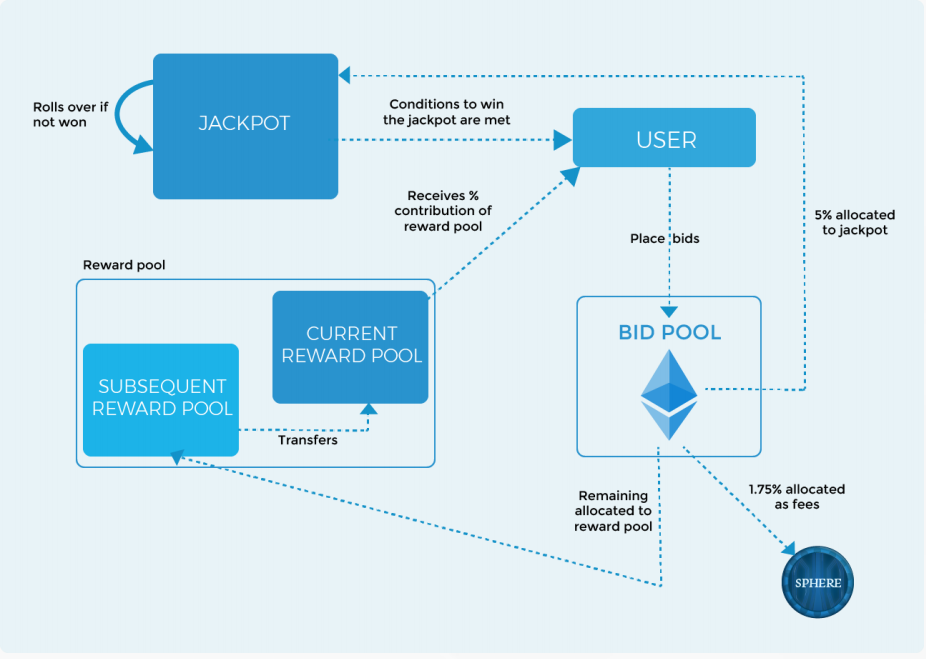 As you can see, the bid pool is divided as follows:

While ideal conditions would suggest that the more players that work together would ensure that more “win”, or in other words gain from the pool, this would not be ideal if the individual is interested in participating in the “Jackpot” round. Game play for a given reward pool differs for those who are looking for to profit only from the current reward pool than those that are interested in entering the Jackpot Round for the bigger payout.  The fewer that enter the Jackpot round, the more chance an individual has to win.

You have to remember, to continue until there is a Jackpot round, individuals must continue to bid and add to the bid pool.  If you do not, you are eliminated from the game and the percentage sent to the Jackpot is lost to you.  this causes this to leave the arena of a “zero-sum” scenario.  Most players would not be likely to just let that 5% go.  This will encourage more to continue to participate to get to the ultimate goal of the Jackpot round.

With these variables involved, the tendency will be that more and more individuals will remove themselves from the “group” and try and direct their game play towards a personal reward to take an advantage in the proceeds of the Jackpot round.  Therefor we see that although working with as many in the group as possible to achieve individual round success is the most logical approach if your goal is to profit from each round, it is not the ultimate way to profit the most and many will defect from the group for the chance at the less probable, but more profitable reward.

If a user’s identification is known then there are social repercussions from his actions.  Other users in the game will identify and attach social characteristics and judgements on the self-rewarding approach of defecting players.  On the blockchain this is eliminated as Ethersphere explains in the whitepaper:

“As a result of anonymity provided by the blockchain, social repercussions are taken out from each participant’s actions and reputational concerns of individuals are reduced. Essentially, the cost considered for performing actions within the game is trimmed down to purely economic terms. Ethereum provides an ideal medium for permitting true game theory based scenarios to be played out in real life.”

Technical and Other Perspectives

Ethereum and its smart contracts allow for better game play by optimising the ability to scale and distribute dividends or revenues.  Etherscape has identified various flaws in the current Ethereum system that it addresses in the whitepapaer, but we will only list the limitations and you can see the solutions in the whitepaper if that interests you in the link in the Resource section below.

The limitations noted are:

Sphere Tokens are created using the Ethereum ERC20 protocols. They will be issued during the ICO on a sliding scale by funding thresholds.  The rate will start at 350:1 and reduce to 70:1.

Over time, Sphere tokens will also be given rights to vote on proposals that are necessary to approve fund usage and mechanics updates.

In the beginning, the DAO will control Ethersphere the ultimate goal is for it to be self-governing by the token holders. The token holders will be given the right to vote on many of the decisions that will be made regarding the future of the project on such issues as:Adding new authorized game contracts Changing funding limits for individual games Changing game fee rates, fragment reward ratio and fragment exchange rates Altering game mechanics Approving any kind of spending Updating DAO contract

As mentioned above, the tokens will be sold on a sliding scale down from the initial 5,000 ETH receiving 400 SPR tokens to the lowest rate os 70 tokens per ETH.  All future token sales will be made at a rate equivalent to 35:1 ETH.